Get into it inside…

It was the VERZUZ Battle pop-up you didn’t know you needed, but once you got it, it was everything you thought it would be…plus more.

On June 29th, VERZUZ made a surprise announcement that R&B legends Keith Sweat and Bobby Brown would perform a special Essence Festival battle after VERZUZ joined forces with Essence Magazine.

Kicking off three days of live shows at New Orleans’ Superdome, Keith Sweat & Bobby Brown – two of the biggest names in R&B – hit the stage to battle it out on stage with one another.

It didn’t take long before the R&B icons started cutting up. During the second round of the battle, Keith performed “Make You Sweat” and then Bobby responded with New Edition’s “Mr. Telephone Man."

While Bobby was performing, viewers in the comment section were clowning over the fact Bobby was screaming his lyrics instead of singing.

After Bobby wrapped up his track, Keith asked, "Hold up. Am I battling Bobby Brown or New Edition?"

"You battling Bobby," Bobby responded before pretending to bring out New Edition on stage.

Despite the vocals, Bobby made sure to serve up a SHOW:

The R&B titans even did an outfit change:

Of course, Bobby showed off some of his dance moves:

And Keith Sweat made sure to serenade the audience:

Mr. Sweat gave the ladies what they want with "Nobody," which features Athena Cage:

Meanwhile, social media was CUTTING UP about the guys sounding winded and how they were serving up uncle vibes. Peep the funny tweets below:

Bobby Brown after trying to hit notes from when he was fuckin 12!#VERZUZ pic.twitter.com/nn2hwUTBKQ

Lmaooo Keith Sweat just said he would have robbed Dj Cassidy back in the day and I believe him. This man is G O N E #VERZUZ pic.twitter.com/AXuBzgheh9

Lmaoooooo Keith Sweat is singing to the Ciroc #Verzuz pic.twitter.com/XjUly49eyR

Bobby Brown after every single pic.twitter.com/s72nCqtM44

Nobody :
Bobby Brown during the Verzuz : pic.twitter.com/6NCMvqTFk4

The Internet remains undefeated.  But listen, it’s all in fun.  We are always here for black legends getting their flowers AND respect.

At the end, Keith & Bobby dapped each other up and shared a hug:

Missed the R&B VERZUZ Battle? Check it out below: 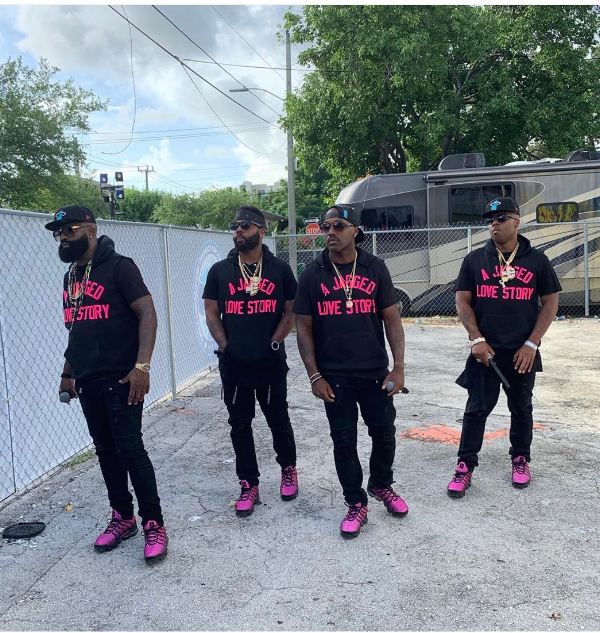 Jagged Edge and 112 brought the R&B vibes for their Verzuz Battle, but they were hit with audio issues. More inside…

Yesterday was Memorial Day, which brought the celebratory energy. As the day came to a close, Verzuz gave us an R&B battle between two of everyone’s fave R&B boy bands from the late 90’s and early 2000’s: Jagged Edge & 112.

The R&B powerhouses went hit-for-hit during a two-hour battle on Instagram. However, it was met with audio difficulties. JE & 112 were plagued with audio issues, which kind of put a damper on the show for some. And Verzuz made sure to let the masses know that they equip the artists with tools to be sure the show is flawless as possible, but they don’t use the equipment given to them. Oop.

We send all the artists special sound equipment that we have worked on with @Roland_US, to help with sound, specifically for IG. Not everyone uses them #VERZUZ

Despite the audio issues, people were still able to enjoy themselves and vibe out to their favorite 90s – 2000s R&B tracks. The legendary groups dropped their classic tracks, back-to-back, serving up all the nostalgia feels.  We were partial to 112 but were here for the whole thing overall.

Thanks to everyone who listened in tonight for a few R&B hits. Apologies for the sound, much luv @jermainedupri @therealswizzz @timbaland @verzuztv We luv y’all, JE

During one part of the stream, one of the Jagged Edge twins asked 112 where was Daron.

One of the twins from Jagged Edge said “where Daron at” and I screamed!!! #Verzuz

Oop.  We assume he missed the memo that Daron and Q left the group a few years ago.

In case you missed, you can check out the full battle below:

Of course, the Internet didn’t have any chill when it came to dragging 112 for audio issues:

*Jagged Edge plays I Gotte Be, Walked Outta Heaven, Promise, Let’s Get Married, Where the Party At, He Can’t Love U, Put A Little Umph In It, What You Tryin To Do, My Baby, Nasty Girl*

Someone from Jagged Edge side said they rebuke the spirit of Teddy Riley #VERZUZ pic.twitter.com/2N6eW7oPcH

Me Trying To Vibe But Jagged Edge Audio Is Not That Good… #VERZUZ #112VsJaggedEdge pic.twitter.com/Negg1eMMbj

Tryna get through Jagged edge speakers to hear the music pic.twitter.com/KQs8J5kZlG

What Jagged Edge is playing their music on right now: #VERZUZ pic.twitter.com/3Fo4t5ogG9

R&B legend Keith Sweat even popped in during the battle:

Spice Adams served up a hilarious recap of the battle:

Next up: Three Six Mafia vs. Bone Thugs-N-Harmony.

[Hook: Lloyd Banks]
General I salute you
I’ll put a hole in any nigga tryin’ to shoot you
It ain’t nothin’ cause loyalty’s what I’m used to
And what I don’t do I’ll have one of my troops do
Nigga we’ll kill you

[Verse 1: Young Buck]
I’m ready for combat, a soldier on the front lines
Take it to the streets nigga mothafuck a punch line
It only take one time for you to send a death threat
And watch these bullets have that ass singin’ like Keith Sweat
You ain’t met me yet, I been camouflaged in the bushes
And I’m co-signin 50 cause them niggas all pussy
Bustin’ shots at ya convoy, you don’t want war
No surrender, no retreat, this is Vietnam boy
Check my war wounds, I done took a couple for the team
Only niggas that been on the battlefield know what I mean
Take cover, we comin’ pullin’ pins out of grenades
You won’t make it to the General without gettin’ sprayed
Might as well say hello to my brand new little friend
Only time he come out to put holes in grown men
You can send your troops and get ’em all blown back
Walk up on ’em wit a deuce deuce, and nigga hold that
BUCK!

[Hook: x2]
General I salute you
I’ll put a hole in any nigga tryin’ to shoot you
It ain’t nothin’ cause loyalty’s what I’m used to
And what I don’t do I’ll have one of my troops do
Nigga we’ll kill you

[Verse 2: Lloyd Banks]
Look nigga, I suggest you go home
Cause I won’t hesitate to let the chrome touch ya
Nigga I’m never scared like Bone Crusher
Stand alone, provide my own supper
Tell ya baby momma stop comin’ around here or I’m gon’ fuck her
We’ll try to take up for them lames around you
He’ll get shots for free like I flagrant fouled you
I’m on the road blowin’ grade A haze and brown
Got niggas runnin’ like the KKK’s around
My album’s comin’, a new year’s approaching
My buzz gettin’ bigger, a few ears is open
Can your team play in the game, without you here to coach ’em
There’s a very fine line between a pool and an ocean
Sometimes I’m in Atlanta where they Bankhead bounce
And you could come, but after you give Banks head bounce
These niggas really want war, cause if so put on your vest
Cause all you gotta do is just say yes

[Outro: 50 Cent (Tony Yayo)]
G-Unit’s like the Firm
Cause you can get in, you can’t get out
(This is G-Unit life right here, know what I’m sayin’
We used to sell drugs, you know bust guns and all the other
Now we’re laid back, now we doin’ us, we live it up
50 got us right, got us kicked up right now)