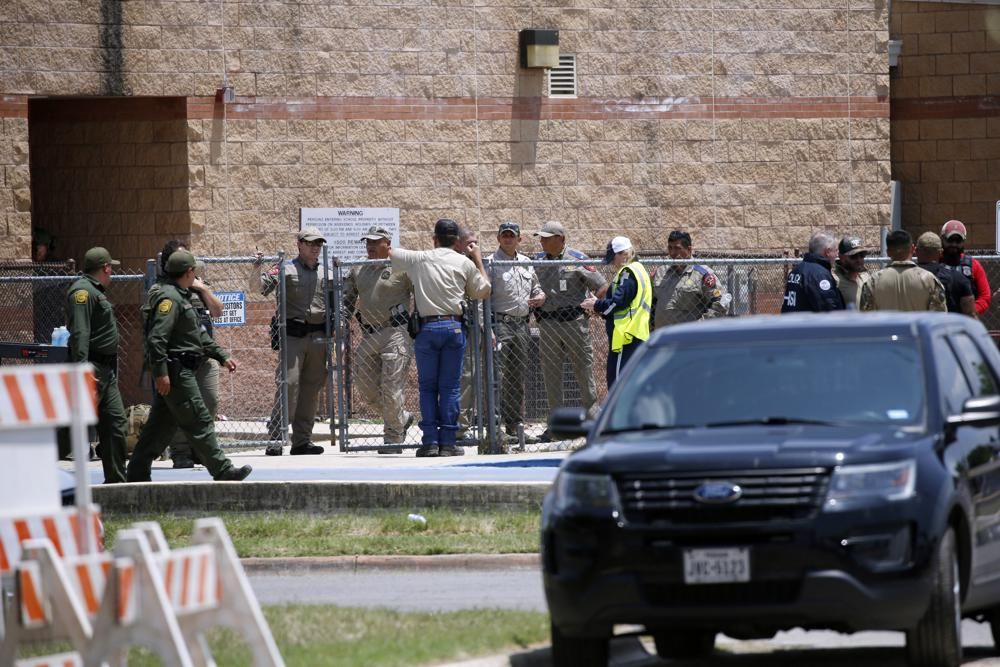 The 18-year-old terrorist who gunned down 19 elementary school students and 2 teachers barricaded himself inside a single classroom, shooting anyone that got into his way, according to authorities. The absolutely horrific mass shooting is now the nation’s second deadliest school shooting. More inside…

19 children and two teachers didn’t come home from school yesterday after the nation’s second deadliest school shooting. Most of America is sick to their stomachs.  Unfortunately, those with the power to make strides to prevent this, clearly are not.

An 18-year-old terrorist broke into Robb Elementary School in Uvalde, Texas, on Tuesday and slaughtered 19 innocent children and two teachers.

There is an active shooter at Robb Elementary. Law enforcement is on site. Your cooperation is needed at this time by not visiting the campus. As soon as more information is gathered it will be shared.

The rest of the district is under a Secure Status.

According to Lt. Chris Olivarez, spokesperson for the Texas Department for Public Safety, the gunman, who may have had a handgun and a rifle, barricaded himself inside of a single classroom and “began shooting anyone that was in his way,” creating an atmosphere of total panic and survival. All of the victims were in the same classroom.

"Just goes to show you the complete evil from this shooter," Olivarez told CNN’s John Berman and Shimon Prokupecz.

As the gunman fired shots, officers were going around the school, breaking windows and trying to evacuate children and staff. Police were able to force entry into the classroom where the shooter was. The gunman – identified as 18-year-old Salvador Ramos – was killed by police after a shoot-out with an Uvalde ISD officer and Border Patrol Tactical Unit agents, a number of whom have children who attend the school, according to the sources.

All of the victims’ families have been notified. The students killed were mainly third- and fourth-graders, according to law enforcement sources.

Multiple children were also wounded inside the classroom, but there is no exact number as to how many at this time.

Despite earlier reports, there was no chase with law enforcement before the shooter crashed his car near the school. He did supposedly engage with nearby officers after he crashed his car, and he still got away and into the school.

It’s still unclear if the school was an intended target.  He did exit his car in full on body armour and a backpack with 2 assault rifles inside.

”We’re trying to determine that, that’s why we’re working with FBI right now to kind of look back to see if there were any indicators, any red flags, looking at social media. What we know about the shooter is that he is a resident here in Uvalde, he did attend one of the local high schools, he lived with his grandparents, was unemployed, no friends, no girlfriend that we can identify at this time, no criminal history, no gang affiliation as well," he said.

The shooter was wearing "a tactical vest carrier with no ballistic panels; so typically those type of carriers are used by tactical teams, SWAT teams, where they can place magazines, extra ammunition inside those carriers and be able to move in a tactical formation," Olivarez said.

A motive was not immediately disclosed, however, investigators revealed Salvador Ramos is a student at Uvalde High School (which just ended their school year) and a resident of Uvalde, which is about 85 miles west of San Antonio.

It’s reported he wrecked his vehicle outside of the school and emerged with an AR-15. He was immediately engaged outside of the building as he approached the school by an Uvalde Independent School District police officer, who was shot by the suspect, sources said. Once inside, he barricaded himself in a classroom and killed everyone in it.

Before the school shooting, Salvador shot his grandmother during a dispute. She’s still alive (in critical condition) and authorities are trying to locate his grandfather and immediate family members.

According to sources, Salvador legally purchased two AR-style rifles on May 22nd, just two days before the shooting and six days after his 18th birthday. He carried out the school shooting just ten days after another gunman executed 10 innocent Black people during a racially motivated attack in a Buffalo supermarket.

Authorities have recovered the guns, body armor the suspect was wearing and numerous magazines and are analyzing the evidence, sources said.

We know common sense gun laws can’t and won’t prevent every tragedy. But we know they work and have a positive impact.

When we passed the assault weapons ban — mass shootings went down.

President Joe Biden called on the US to turn its collective pain into political action following the deadliest elementary school shooting since Sandy Hook in 2012.

Check out reactions to the shooting below:

It’s another tragedy the nation has to deal with as politicians continue to argue about gun control instead of actually putting laws in place to protect the people. Something HAS TO CHANGE.  As for what that change is, listen to Coach Steve Kerr (above) speak before yesterday’s NBA playoff game on the tangible change we all can do, and we also explain why this has yet to be done and who is preventing it from being done.