Peep their red carpet looks inside…

The City of Angels was LIT with stars last night for the Los Angeles premiere of The Harder They Fall, which is a Black cowboy film set to hit Netflix, held at Shrine Auditorium and Expo Hall.

The Harder They Fall is an all-Black Western based on real-life figures from American History. The main character is an outlaw – played by Jonathan Majors – who discovers his enemy (Idris Elba) is being released from prison and reunites his gang to seek revenge.

Below is a full synopsis of the film:

When outlaw Nat Love (Jonathan Majors) discovers that his enemy Rufus Buck (Idris Elba) is being released from prison he rounds up his gang to track Rufus down and seek revenge. Those riding with him in this assured, righteously new school Western include his former love Stagecoach Mary (Zazie Beetz), his right and left hand men — hot-tempered Bill Pickett (Edi Gathegi) and fast drawing Jim Beckwourth (R.J. Cyler)—and a surprising adversary-turned-ally. Rufus Buck has his own fearsome crew, including “Treacherous” Trudy Smith (Regina King) and Cherokee Bill (LaKeith Stanfield), and they are not a group that knows how to lose. Directed by Jeymes Samuel, written by Samuel and Boaz Yakin, produced by Shawn Carter, James Lassiter, Lawrence Bender and Jeymes Samuel, and featuring a red hot soundtrack and a stunning all-star cast, including Jonathan Majors, Zazie Beetz, Delroy Lindo, LaKeith Stanfield, Danielle Deadwyler, Edi Gathegi, R.J. Cyler, Damon Wayans Jr., Deon Cole with Regina King and Idris Elba revenge has never been served colder.

Hip Hop mogul Jay-Z was in attendance since he is an executive producer of the film and he’s also behind the film’s music score. On the carpet, he snapped it up with the film’s director Jeymes Samuel, music producer Swizz Beatz, singer Seal and more.

Not on the carpet, but always holding it down…

The mom-of-three is pure perfection. And we stan.

Kelly Rowland, former Destiny’s Child member, posed it up in a single shoulder feathered dress, with a high slit that she accessorized with gloves.

Hov didn’t recognize Kelly as she walked up to greet him, but one he did, he turned around quickly to show her some love:

Obsessed with this super cute moment from last night’s special screening of The Harder They Fall — Shawn ‘Jay-Z’ Carter (who is a producer) is headed inside but pulls a 180 as soon as he sees Kelly Rowland! That’s family right there. pic.twitter.com/QVrw1KHoZk

The film’s director Jeymes Samuel ran into one of the film’s stars, Regina King, who rocked a David Roma dress.

"It’s a space where I haven’t really gotten a chance to play as an actor," she recently told "Good Morning America" about the Western genre. "As an audience member, it’s a space that I don’t get to see this many — to see us as Black people, even though we are and have been a part of the Western culture, of that history," she said.

Bad Trip stars Tiffany Haddish – wearing a Alexandre Vautheir dress – and Lil Rel Howery linked up for a photo-op on the carpet. 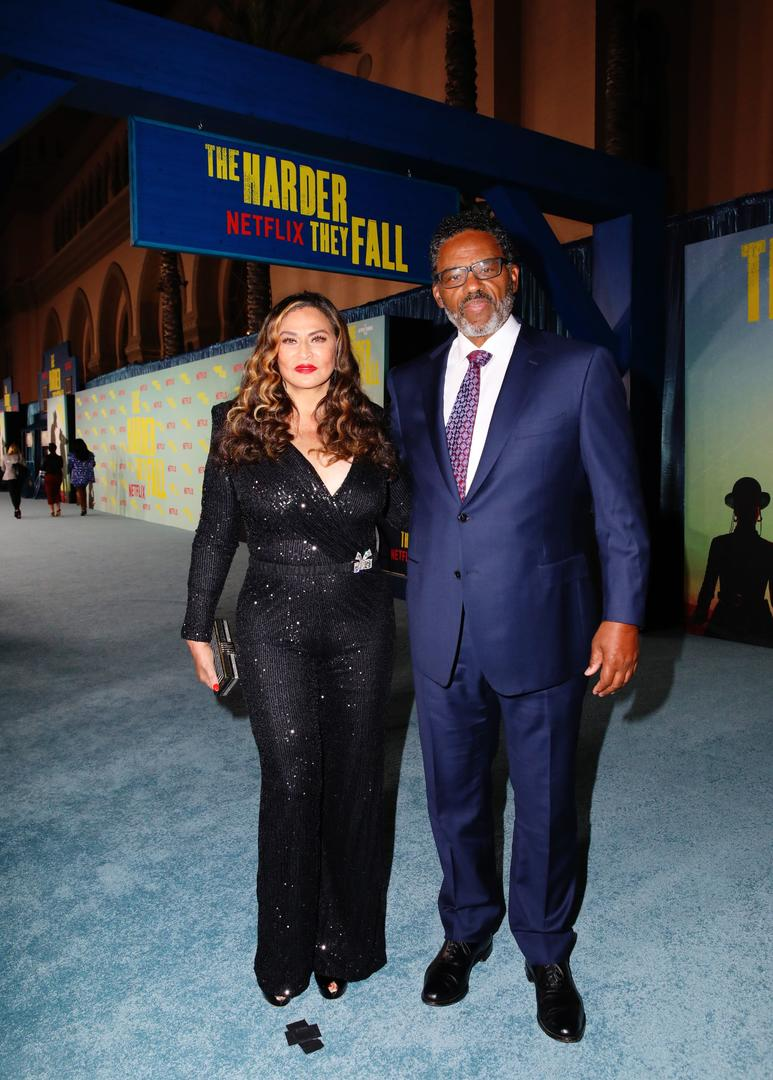 "Claws" actress Karrueche struck a pose on the carpet in an interesting look.

Triple threat Teyana Taylor and rapper Jay Electronica made their way to the event.

The gorgeous Kelly Rowland made her rounds at the afterparty, stopping for flicks with "Grey’s Anatomy" star Jesse Williams and "Empire" alum Bre-Z.

"Empire" alum Taraji P. Henson pulled up to the party in all-black.

Producer Swizz Beatz and his wife Alicia Keys came out for the turn up.

The Harder They Fall’s costume designer Antoinette Messam was all smiles during the afterparty.

More from the star-studded event below:

The Harder They Fall premieres in select theaters October 22nd and on Netflix November 3rd.