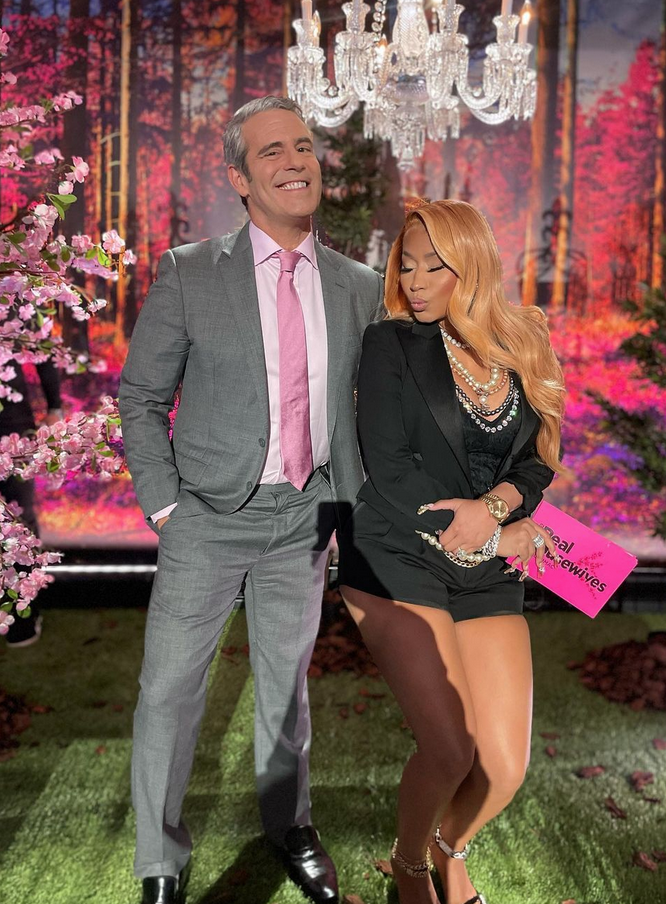 Looks like Nicki Minaj is joining in on the "Real Housewives of Potomac" reunion afterall.  She and Andy Cohen posted flicks from last night’s taping, and it looks like her hosting dreams are coming true.  Not everybody is here for it though.  Deets inside.

Well this is interesting. Several weeks ago self-proclaimed "Real Housewives" fan Nicki Minaj made her desire to become the host of the RHOP reunion known.  Now, Andy Cohen is making it real.

Last night, the Potomac ladies jetted to New Jersey to film the reunion, and Nicki posted pics of herself on the set with Andy Cohen holding cards, just like a host would.  Then, Bravo confirmed it’s happening:

Nicki shared flicks in her Dolce & Gabbana ensemble with matching pearl sandals while confirming the hosting news as well:

Andy offered up a few more details, saying the rapper came in toward the end.  So it looks like she will only be involved for a segment or two.  He said on Instagram:

"It’s the Reunion I could never get away with! At the end of ours, tonight @nickiminaj surprised the #RHOP and did her own thing! #AndyConda"

Nicki Minaj behind the scenes of #RHOP reunion pic.twitter.com/qIUaU5APJ7

Not everybody is happy about Nicki popping in though.  After all the drama with her and her husband Kenneth Petty – with them being sued for allegedly threatening and intmidating Kenneth’s rape victim – folks are wondering why Andy decided to have her on.  The rape victim, Jennifer Hough, recently went on The Real to tell her disturbing story.

So, not everyone is here for this decision from Bravo, considering Andy allegedly had Phaedra Parks fired for her false sexual assault accusations about Kandi Burruss on "RHOA". 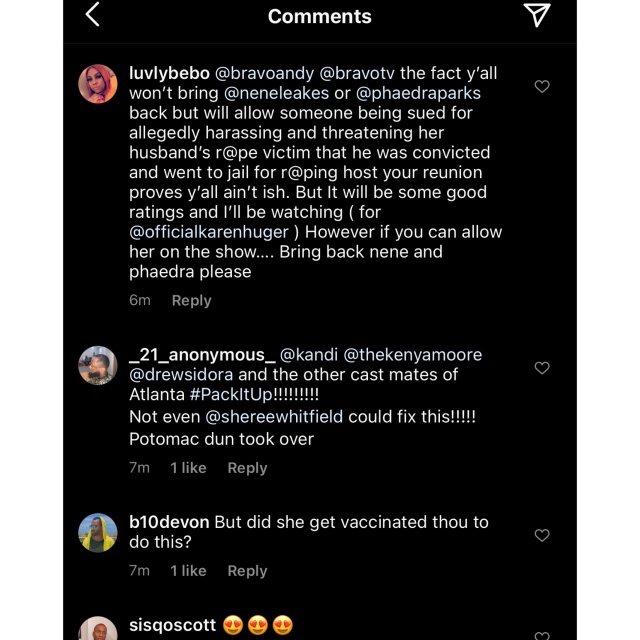 Me seeing Candiace drag both Nicki and Ashley’s husbands at the reunion #RHOP pic.twitter.com/skcPNHOkCw

Rhop hashtag is toxic as it and now you add in the Barbz. All hell gonna break loose come reunion day. pic.twitter.com/LTIZ2qNh9C

When Nicki Minaj shows up to the RHOP reunion pic.twitter.com/9pqBnQN9qB

I don’t think I’m excited for Nicki anymore after the past month #RHOP pic.twitter.com/xvXpSiwFBj

When these two bond over their predator husbands #rhop pic.twitter.com/O9HT9Sfc8y

nicki need to go on and sit her ass on that reunion couch with the other ladies cuz we the viewers got some questions for her too #RHOP #RHOPReunion pic.twitter.com/SftFB34SdK

Still, there are fans who are here for it all:

She was really serious when she said she was going to do it https://t.co/8GLNsObfMi

Just a few weeks ago y’all was spreading false rumors Nicki got denied being on RHOP reunion now look at my sis hosting and serving looks down! What was said? pic.twitter.com/wFmtqprPXk

Folks also had questions about whether or not she’s vaccinated, since she’s pulled out of multiple events, including the MET Ball, claiming she wasn’t going to get vaccinated solely to attend an event.

TMZ reports that vaccination wasn’t necessary this go-round, only testing:

So, with her appearance on the ‘RHOP’ reunion set Thursday night — something that came to fruition after she jokingly pitched guest-hosting to Andy Cohen in July — fans believed she might have gotten vaccinated in order to get the gig.

But, we’ve learned that’s not necessarily the case … because being vaccinated was not a requirement for the reunion taping.

Instead, Nicki and the ‘Housewives’ and the rest of the crew only had to comply with local orders in New Jersey … so in this case, getting a PCR test that came back negative for COVID.

Obviously, everyone who participated in the reunion taping, including Nicki, had a negative test … but it’s still unclear if the rapper’s vaxxed or not.

The reunion is set to air later this year. Y’all here for it?