Several fashion vets made their way to The Metropolitan Museum of Art in NYC to flex their American fashions for this year’s Met Gala theme.

Go inside for the fashion deets on the legends of the Met Gala who have made it a HABIT to slay every time…..

Fashion lovers rejoiced when the red carpet opened for the biggest night of fashion. Especially since the Met Gala got canceled last year due to the Coronavirus pandemic.

This year, celebs had to prove proof of vaccination to attend this year’s gala, hence why Nicki Minaj announced she wasn’t attending (at least in part).

Since we’re just getting back into the swing of things, the Met Gala dedicated this year’s theme to the United States titled, "In America: A Lexicon of Fashion." 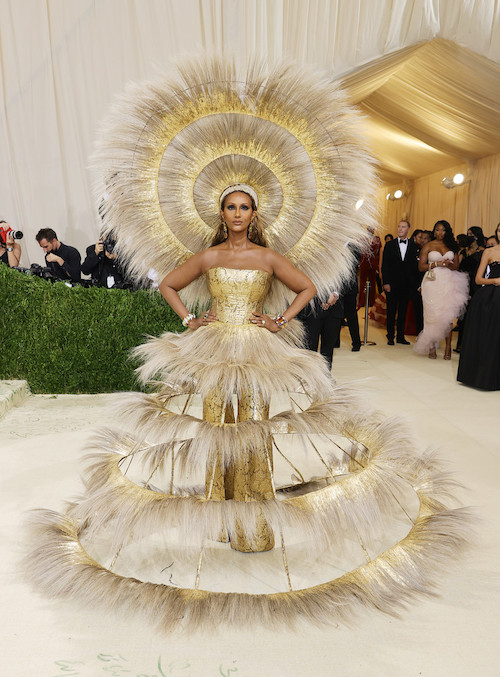 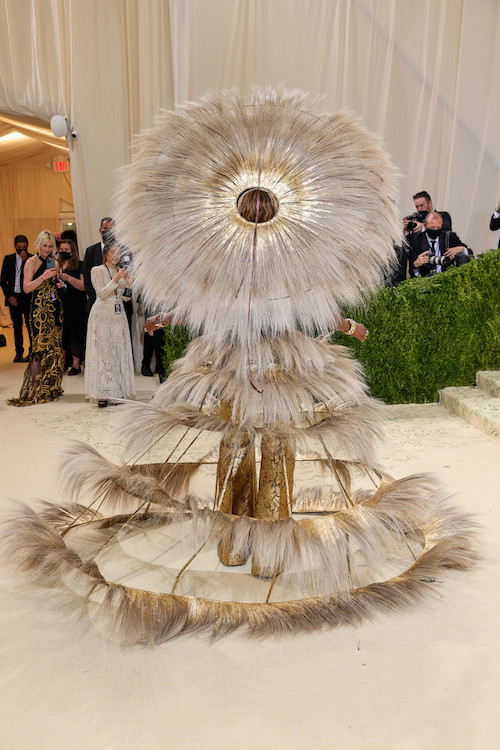 As she made her grand entrance, IMAN glowed in gold Harris Reed that featured a tiered metallic overskirt and a custom headpiece to match. 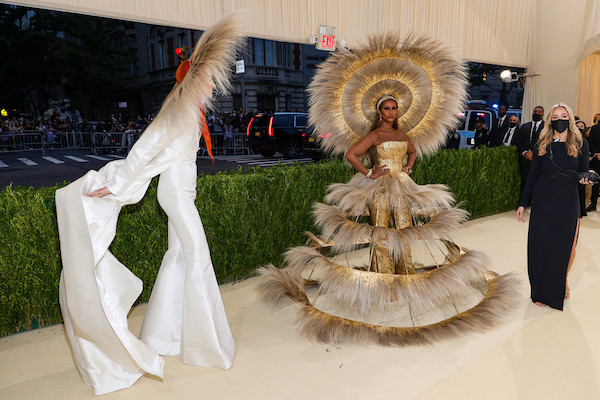 THIS is how you do the Met Gala. And honestly, the carpet REALLY could have been closed after Iman arrived.  Because chick shut ish down.

A post shared by The Metropolitan Museum of Art (@metmuseum)

Jennifer Lopez never disappoints at the Met Gala and this year wasn’t any different.

She took a risk and it worked. We’re feeling the Western chic flawlessness, a nod to America’s hstory with the wild, wild west,  that only she can pull off.

And her boo Ben Affleck was right by her side:

Jennifer Lopez and Ben Affleck on the #MetGala carpet. pic.twitter.com/MPAv5APUus 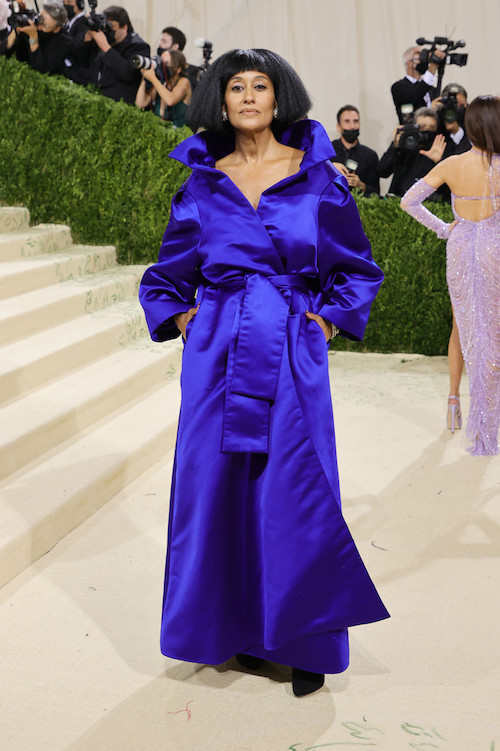 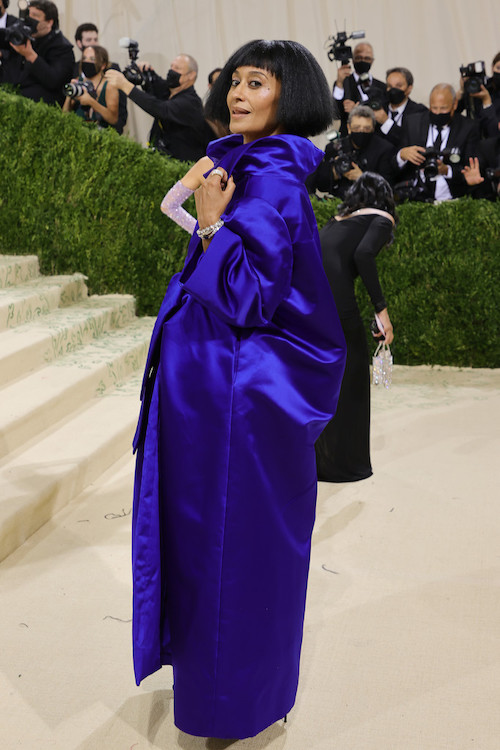 She slipped into a royal blue Balenciaga couture number to pay homage to a few Black American icons. Watch her breakdown her ‘fit with Keke Palmer below: 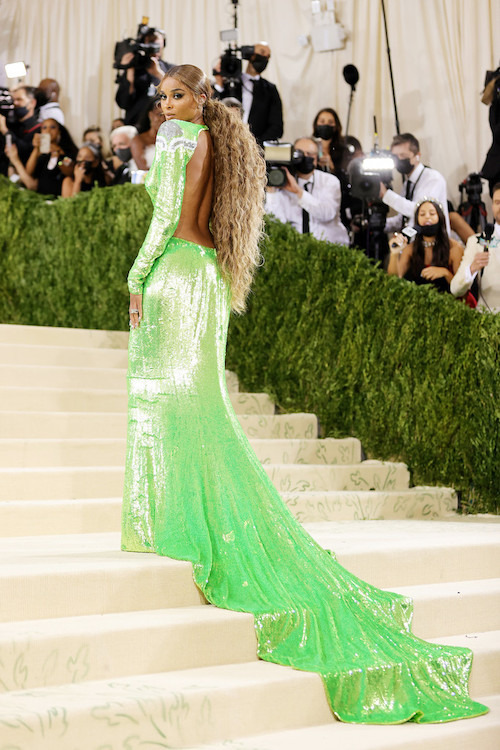 Ciara loves an edgy look for the Met Gala. And it doesn’t get much edgier than rocking a football jersey dress to rep for her NFL husband Russell Wilson. Especially since there’s no sport (other than baseball) more American than football. 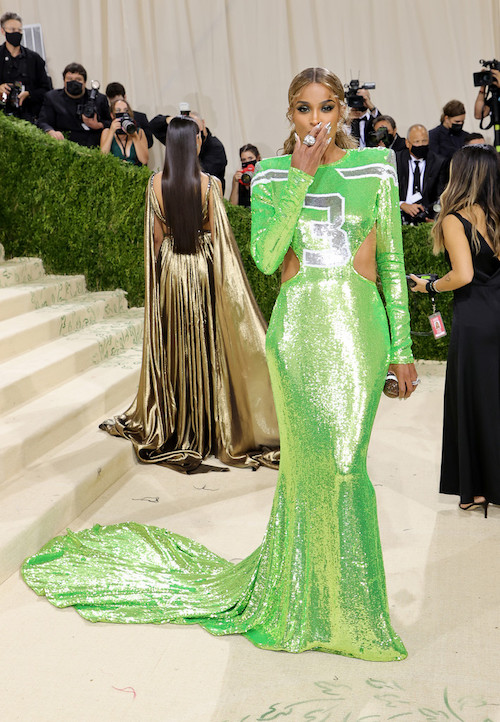 The mom-of-three slipped into a bright green, Seahawks inspired, cut-out Peter Dundas gown that was obviously custom made just for her. The dress featured the number 3 on the front, which is the same number her husband wears. And the crystal covered football purse is super cute.

It’s different. It fits the theme. And it works.

Oscar winner Lupita Nyong’o looked amazing and her hair – inspired by the artworks of Lorna Simpson – pulled her look together: 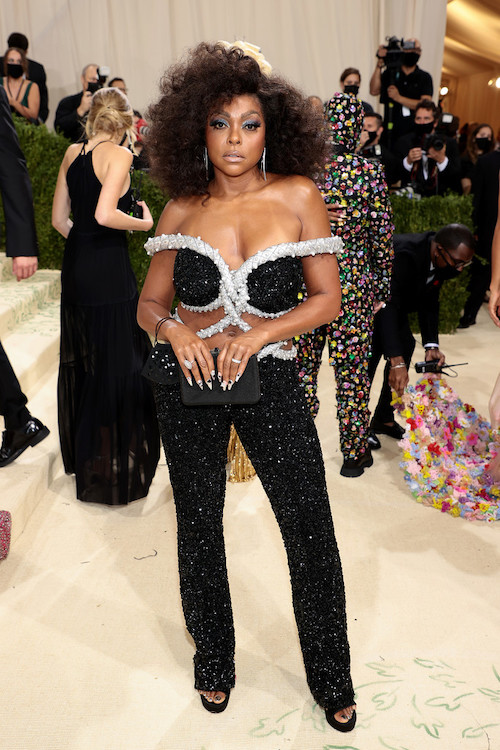 Taraji P. Henson – who celebrated her birthday on Saturday – hit the Met Gala carpet in a Moschino jumpsuit that featured a little butt cleavage. On the carpet, she said she was going to turn up all month for her birthday! 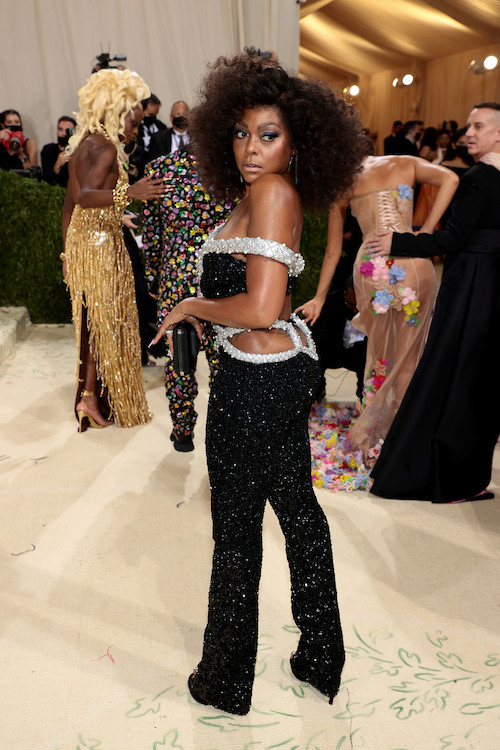 One time for the birthday chick! She said her look was inspired by iconic singer Diana Ross: 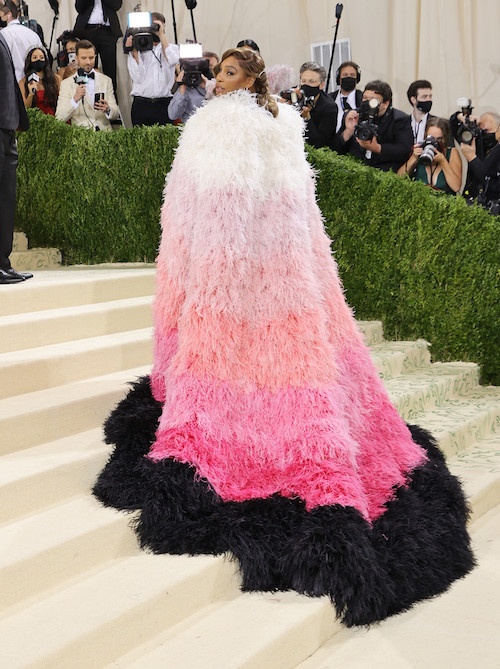 Tennis superstar Serena Williams loves a feathered look, so she incorporated that in her superhero-inspired Gucci ‘fit for the night. She kept her cape on while on the carpet, so we couldn’t get a good look at her lace, star covered bodysuit underneath. 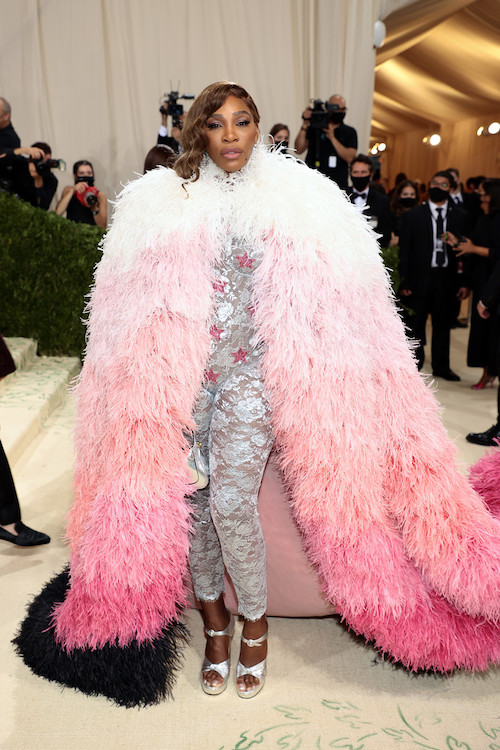 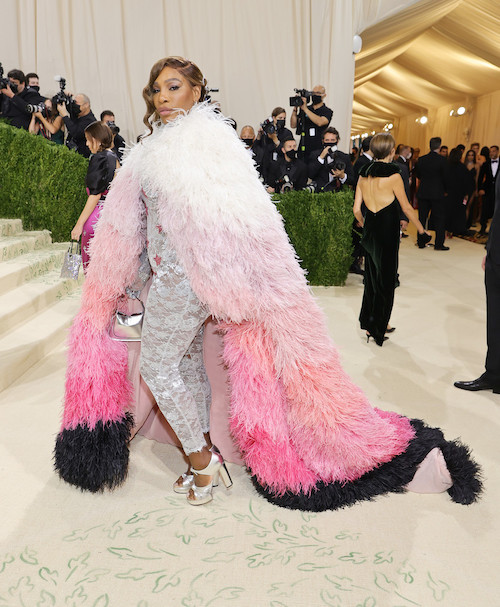 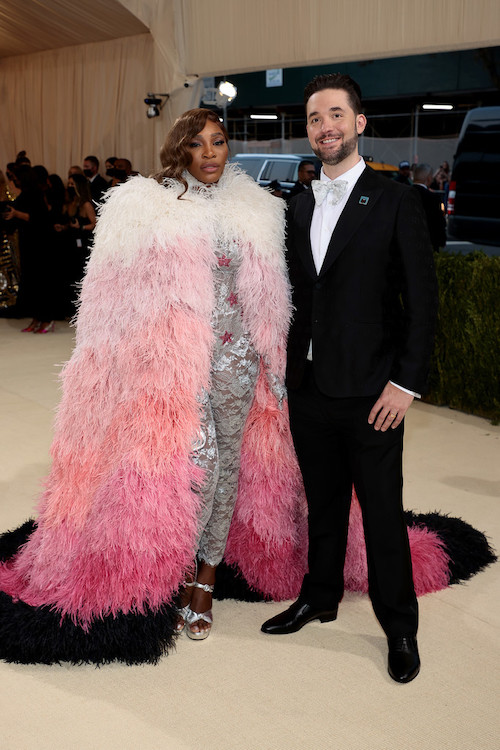 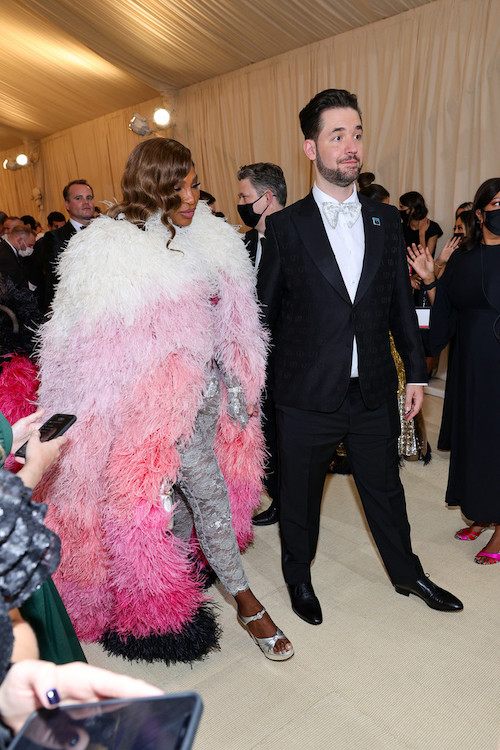 She brought her hubby, Alexis Ohanian, as her date. 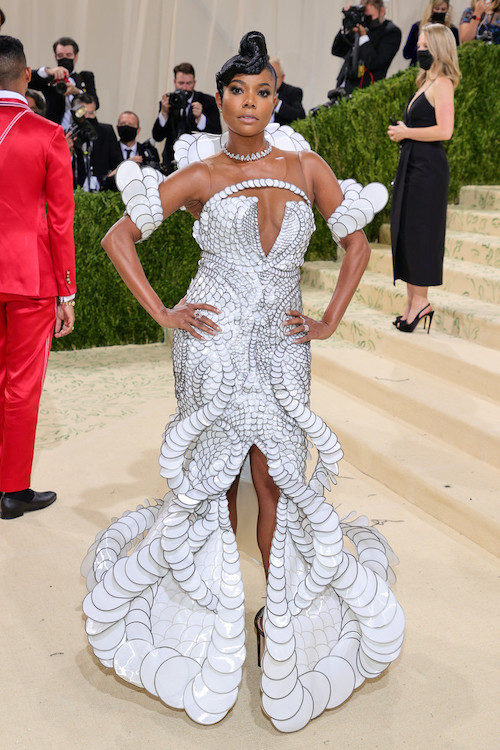 "L.A.’s Finest" actress Gabreille Union is no stranger to posing it up at the Met Gala. She wore an intricate piece of art made by Iris Van Herpen. On the carpet, Gabby said they started working on the piece in April and 1,400 hours went into its creation.

"This work of art changes with every step. It’s what this dress embodies. For me, what’s needed in fashion and in life is change and evolution," she captioned.

Designer Iris Van Herpen dished on the inspo behind the dress:

We created Gabrielle her custom look passionately for this year’s Met Gala, thousands of spheres are cut and layerd in size gradients from a translucent white ‘liquid’ fabric and lasercut with a fine silver outline, to then be handstitched seamlessly in a multilevel optical illusion from which waves seem to float down weightlessly.

Grateful for our atelier & great talents that have created the hypnotic artistry meticulously.

Enlivening positive change ~ in November this custom creation will be auctioned with @Sothebys and the proceeds will fully be donated to the @AmazonConservation Association and the @RainforestTrust .

Her stylist for tonight broke down just what it took to make this piece of art as well:

Change. Instead of referencing what was, we wanted to create a dress that embodied what is needed: change, forward momentum, infinite progress. Comprised of over 10,000 circles, the innumerous spheres and final dress took 1,800 hours to construct. Gabrielle’s dress changes and moves as she wears it – even when standing still. As a champion for progress, change, and evolution, tonight Gabrielle Union-Wade is embodying what we need to see in American Fashion. 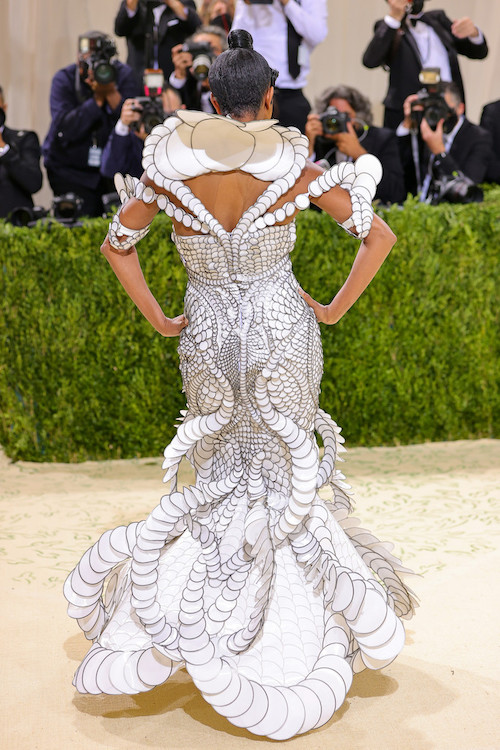