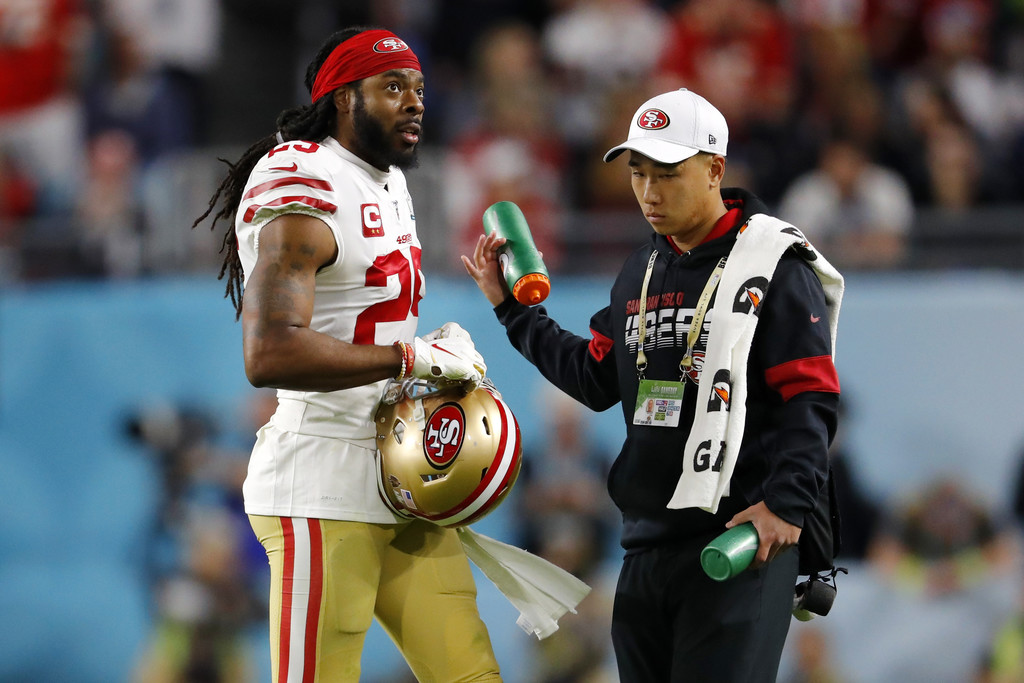 UPDATE BELOW.  Extremely shocking reports just surfaced of Super Bowl champ Richard Sherman‘s arrest on a possible burglary domestc violence charge. He’s currently in county jail – without bail – after being taken down by K9 dogs outside of "a family member’s home".  And there’s more.

[UPDATE]: The Seattle Times reports that Richard Sherman’s wife, Ashley, gave them a statement via phone.  She seemingly chose her words strategically:

“At this time we’re going to make no statements, except he didn’t harm anybody,” Moss said. “My kids were not harmed in the incident. He’s a good person and this is not his character. We’re doing all right, just trying to get him out. I want people to know no one was injured.”

Richard cannot be formally charged until Thursday and will remain in county jail until then.

The Seattle Times also reports they are investigating a possible hit-and-run and Richard possibly being impaired.

Early this morning, around 2AM in Washington state, NFL free agent Richard Sherman was arrested while allegedly attempting to break into a family member’s home.

The 33-year-old NFL free agent was booked into the King County Correctional Facility in Seattle at 6:08 AM … and is currently sitting behind bars. The Burglary Domestic Violence charge is a felony in Washington state … and can carry a lengthy prison sentence, if convicted.

More details have just seeped out, and they’re quite wild.

According to the spokesperson, officers showed up to a residence in the Redmond area after receiving a call from the occupants inside the home who claimed a family member who did not live there was trying to break in.

Cops say when they arrived on scene, they identified Sherman as the suspect … and claim he became uncooperative and combative during questioning.

Sherman allegedly fought with cops so much … we’re told a K9 was deployed to take down the NFL player and help bring him into custody.

Cops say he was taken to the hospital to be looked at for possible injuries before he was eventually booked at the county jail.

Before Richard even arrived at the home, allegedly, he also allegedly crashed his vehicle on a freeway and ran the rest of the way to the home.

There’s more … the Redmond P.D. spokesperson also tells us the Washington State Patrol is involved in the case, after Sherman allegedly crashed his vehicle into a cement freeway barrier before he advanced on foot to the home.

The State Patrol responded to a one car collision on eastbound Highway 520 near the 148th Avenue Northeast exit around 1 a.m., said Trooper Rick Johnson. The vehicle, which had crashed into a jersey barrier, had left the scene by the time troopers arrived but it was found disabled or abandoned off the exit, Johnson said.

Troopers ran the license plate, which led them to an address in Redmond, where they assisted Redmond police in placing a man into custody, he said. Troopers observed indications of possible impairment and obtained a warrant for a blood draw, said Johnson.

“At 11:26 p.m. on Tuesday, July 13, Redmond Police were notified by the King County Sherriff’s Office that Sherman was possibly traveling to Redmond. At approximately 1:49 a.m. on Wednesday, July 14, Redmond police officers were called to a residence for a reported in-progress burglary. Sherman was attempting to force entry into a family member’s home.

“Officers arrived and located Sherman outside the home. The suspect fought with officers while being taken into custody, resulting in a Redmond K9 team being deployed to assist in gaining control.

“Troopers with the Washington State Patrol were also on-scene investigating a hit and run incident. The individual is suspected of leaving his severely damaged vehicle and fleeing on foot after striking a cement barrier to an SR 520 off-ramp prior to him arriving at the residence.”

As for why he was in Washington state, he likely kept his home there from when he played (and won a Super Bowl with) the Seattle Seahawks.  Richard played in Super Bowl 2020 for the 49ers, but is now a free agent.

Naturally, with a charge like burglary domestic violence, one may think this could involve a spouse.  That has not been confirmed. 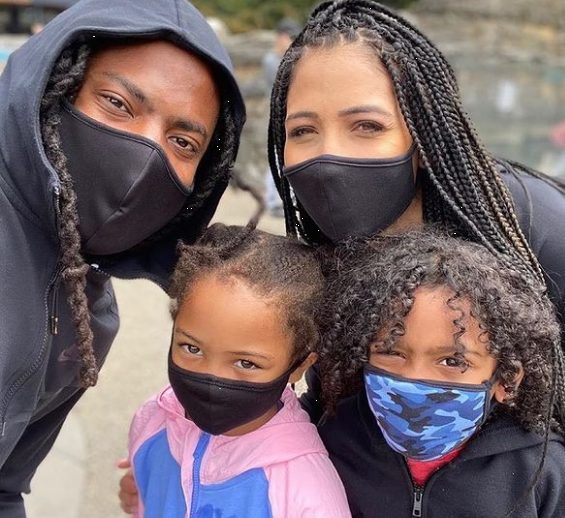 Richard and his wife, Ashley Moss Sherman, have been married for over 6 years and have 2 kids together.

Richard called her his "beautiful queen" just a couple days ago on her latest IG post: 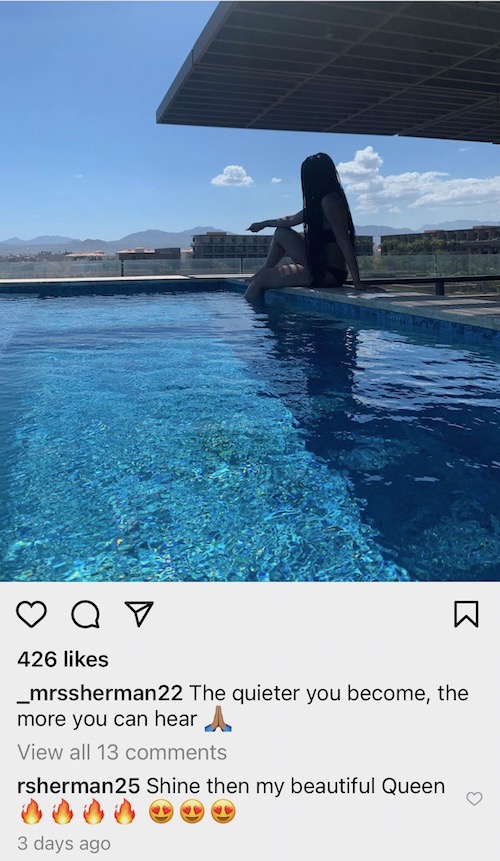 Folks are already in her comments asking her if she’s ok, and leaving face palm emojis in response to Richard’s comment. 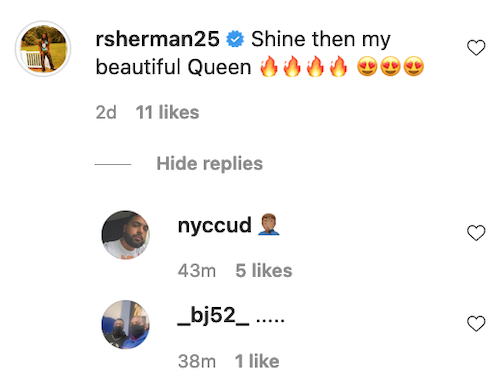 And Richard spent yesterday at an amusement park with the kids: 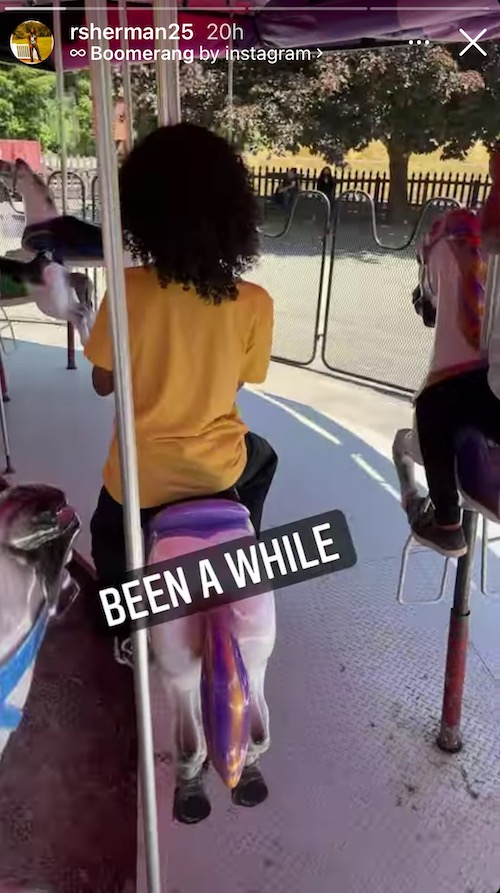 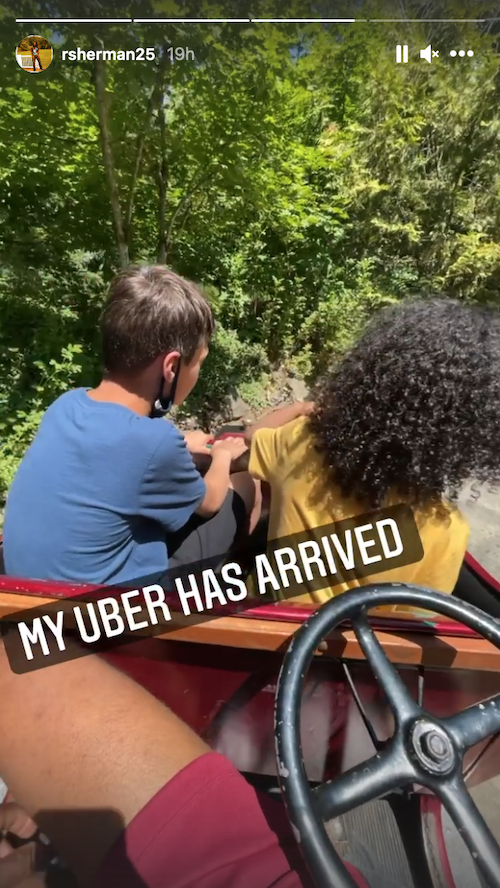 Again, it has not been said whether Ashley is involved in any way.

Regardless, this incident is quite out of character for Richard, who has been known to be one of the most stand-up guys in the league.  The Stanford Grad and 5x Pro Bowler has made philanthropy, activism and education-based business moves his main off-field concerns.