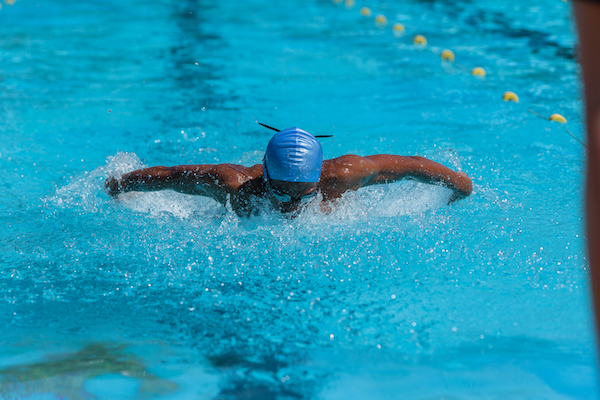 The Olympics committee is doing what so many "governing bodies" do globally – making decisions based on white centered features.  And those decisions, this time around, have a disproportionate impact on black swimmers.  Get into the super controversial swim cap bans affecting people with natural hair inside.

If you’re a swimmer or diver who happens to have locs, braids, an afro or other natural hairstyles rocked by black people, you might be out of luck if you’re looking for a swim cap to aide you like ALL other swimmers have.  Swim caps specifically designed for people with natural and/or afro hair have been banned by the International Swimming Federation, and now the Olympics.

Swimming caps designed to encourage Afro swimmers with long, thick and voluminous hair to pursue their sport without barriers have been banned for use in the upcoming Tokyo Olympics.

The International Swimming Federation said the caps, made by the Black-owned British brand Soul Cap, do not "fit the natural form of the head" and to their “best knowledge the athletes competing at the international events never used, neither require … caps of such size and configuration.”

Noliwe Rooks, the chair of and a professor of Africana Studies at Brown University, made it clear this ban is right in line with other black-targeted bans that stem from non-black people simply judging ALL people based off solely what they know.  They have no knowledge of how black hair works, and find no reason to seek out an understanding, so blacks are stripped of equal tools for their own features.

"While this ban does not specifically speak about specific Black hairstyles in terms of a ban, as have previous bans from the U.S. military and various corporate concerns and workplaces, this ruling disregards the needs of Black women to protect their hair and their hairstyles when they swim," Rooks said.

"The ruling specifically mentioned the fact that Soul Caps do not hug the scalp, but Black hair does not necessarily lay flat against the scalp, and also can have a thickness that makes it impossible to keep a traditional swim cap from filling with water as the athlete swims," Rooks said.

Soul Cap, a company founded by two black men who saw the issue black women were facing during their own swim classes, is a company that was going to be front and center in the swim races.  Now, not so much.

The news comes after Alice Dearing, the first Black woman to represent Britain in Swimming at the Olympics, announced she would be wearing the Soul Cap during the races as a brand ambassador.

Alice is a co-founder of the Black Swimming Association, and her partner and fellow co-founder Danielle Obe spoke out recently saying:

Danielle Obe, the founding member of the Black Swimming Association, told The Guardian the ban has "created a sense of exclusion for members of the black and minority ethnic community," as other swim caps for Afro hair are difficult to find.

“If the (official swimming bodies) are talking about representation, they need to speak to the communities to find out what the barriers are that are preventing us from engaging," Obe said. "Hair is a significant issue for our community.”

The Founders gave their compelling backstory that proves why specific swim caps for specific hair are necessary:

In a statement, FINA said  it "is currently reviewing the situation with regards to ‘Soul Cap’ and similar products, understanding the importance of inclusivity and representation."  Mmhmm.  We’ll see. 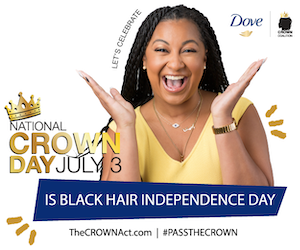 We just know this is a PRIME reason why The Crown Act is necessary, and needs to be a global push.  Folks just won’t let us be great.  But we’ll continue to dominate even with a disadvantage.

It's All About The C.R.O.W.N: Creating a Respectful and Open World for Natural Hair!