Former Minneapolis police officer Derek Chauvin was sentenced to 22.5 years behind bars for the murder of George Floyd. Peep the social media reactions inside…

Former Minneapolis police officer Derek Chauvin was sentenced today. He was reportedly sentenced to 22.5 years in prison after he was convicted of murdering George Floyd last year. Floyd’s death caused an eruption of protests across the nation to raise awareness to police brutality.

"I ask about him all the time," Gianna said. Then she said, "How did my dad get hurt?"

"We used to have dinner meals every single night before we went to bed. My daddy always used to help me brush my teeth," Gianna said while smiling.

She said if she could speak with her father, she would tell him she loves and misses him.

Watch her heartbreaking statement below:

Terrence Floyd, George Floyd’s brother, reads tearful victim statement at Chauvin sentencing: "What was going through your head when you had your knee on my brother’s neck? When you knew that he posed no threat anymore…why didn’t you at least get up?" https://t.co/IuuRKnTv3s pic.twitter.com/veetWndojT

"What was going through your head when you had your knee on my brother’s neck? When you knew that he posed no threat anymore…why didn’t you at least get up?," Terrence asked Derek during his statement.

"Everyday I have begged for justice to be served … George’s life mattered … I am asking that you please find it suitable to give Officer Chauvin the maximum sentence possible. … My family and I have been given a life sentence," Philonise said during his statement.

Derek Chauvin, who knelt on the neck of unarmed and handcuffed George Floyd, 46, for over 9.5 minutes leading to his death, was found GUILTY on all three charges of second-degree unintentional murder, third-degree murder and second-degree manslaughter. 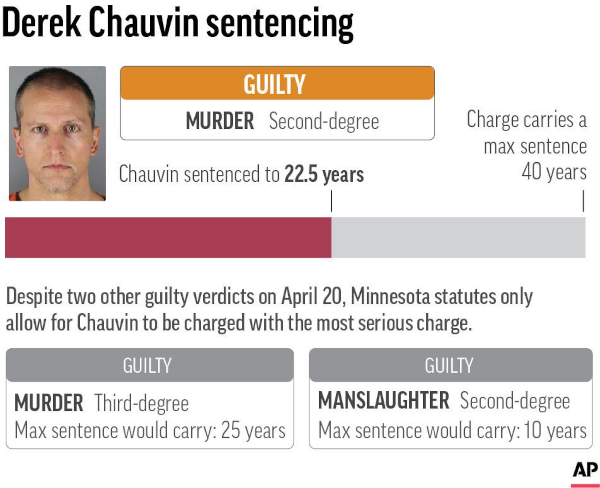 Derek’s mother gave a nauseating statement during the trial. No apology to Floyd’s family. No show of sympathy. Nothing. Just a selfish white woman trying to save her white son from doing prison time for murder.

“My son’s identity has also been reduced to that as a racist. I want this court to know that none of these things are true and that my son is a good man," she said. “Derek, I want you to know I have always believed in your innocence, and I will never waver from that.”

Peep the clip below:

Derek Chauvin’s mother Carolyn Pawlenty speaks to him before sentencing: "I want you to know, I have always believed in your innocence and I will never waiver from that. I have read numerous letters from people around the world that also believe in your innocence." pic.twitter.com/BegHU5EFqF

During the hearing, Derek Chauvin broke his silence for the first time, offering condolences to the Floyd family. He said he hopes more information coming out will eventually give them “some peace of mind.” Bye.

Here’s a clip below:

“I do want to give my condolences to the Floyd family. There’s gonna be some other information in the future that would be of interest, and I hope things will give you some peace of mind. Thank you.” pic.twitter.com/q5fwTCxTIB

If the 45-year-old former Minneapolis police officer exhibits good behavior in prison, he could be paroled after serving two thirds of his sentence, which would be about 15 years. He will be eligible for supervised release for the remaining seven and a half years. On the flip side, the sentence exceeds what the prosecution asked for at bare minimum, which was at least 15 years. The max sentence for second degree murder in MN is 40 years.

After the sentencing, crowds gathered outside of the courthouse, including civil rights leader Rev. Al Sharpton and attorney Ben Crump.

Minnesota AG Keith Ellison: "Congress has still not passed the George Floyd Justice and Policing Act. I call on leaders and members of Congress to pass the best and strongest version of this bill that can be passed, and to pass it now!"https://t.co/IuuRKnTv3s pic.twitter.com/0tNBgGqfFJ

The trial of #GeorgeFloyd reaches its crescendo today with Derek Chauvin’s sentencing of over 22 years. There is no happy ending to such a heinous act and we know there is still work to be done.

Let’s continue to pick up our mics to inspire and encourage true change. pic.twitter.com/I1nb2Ii1mD

If you’re wondering if Derek Chauvin’s sentence is fair, Chauvin will be 60 years old when he’s released from prison after serving 15 years of his 22 1/2-year sentence. George Floyd was murdered by Chauvin when he was 46. Floyd can never resume his life. Chauvin can.

I bet that’s exactly what George family was thinking when he died and she can do all the things that George Floyd’s family will NEVER be able to do. https://t.co/bdxs48BLUE

Understand Chauvin’s
Mom Not Wanting Her Son 2 Be Gone,But GEORGE FLOYD’S MOM WILL “NEVER” SEE HER SON AGAIN.Chauvin’s Lawyer Said”If Only He Hadn’t Gone 2 Work That Day,Answered That call.”
I SAY”IF ONLY HE HADNT PUT HIS WEIGHT ON GEORGE’S NECK FOR 9 MINS.HE HAD 9 MINS
2 STOP

22.5 years is not enough for Derek Chauvin MURDERING George Floyd in broad daylight when we have people serving life sentences for non violent crimes

Derek Chauvin only got 22.5 years for murdering George Floyd, meaning that even if he did all of the years of his sentence, he would still be young enough to potentially enjoy decades of life. This should have been the max sentence.

270 months won’t bring back George Floyd or remove the pain felt by his family and our country, but it is the accountability we need.

Thoughts on the sentence?